Jeremiah Milbank was a man of remarkable accomplishments. A businessman and financier, he developed an intensely personal interest in health and rehabilitation after losing his mother, father, wife, and a son to disease and premature death in the five years before his 30th birthday.

Motivated by a desire to help disabled World War I veterans, he collaborated with the American Red Cross to found the first comprehensive rehabilitation center in the United States to address their needs. The professional standards and rehabilitative techniques pioneered there were adopted throughout the world. The facility still operates in Manhattan as the ICD-Institute for Career Development. 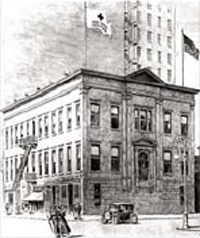 The ICD-Institute for Career Development, located on East 23rd Street in New York City from 1917 to 1920, was the nation’s first comprehensive rehabilitation agency.

Jeremiah Milbank led efforts to eradicate diphtheria and organized the International Committee for the Study of Infantile Paralysis in 1928. Because of his active interest in a cure for polio, President Franklin Roosevelt asked him to chair the organization that was the forerunner of the National Foundation for Infantile Paralysis.

A lifelong volunteer, Jeremiah Milbank helped President Herbert Hoover to develop the Boys & Girls Clubs of America into a strong organization that provides supportive services for disadvantaged youth. He served as Treasurer of the national organization for 25 years.

Deeply held spiritual beliefs led him to finance the first film about the life of Jesus Christ, Cecil B. DeMille’s epic King of Kings. Jeremiah Milbank instructed that all income derived from the film should be used to make it available to new audiences. DeMille later wrote, “There is a persistent myth that capitalists think of nothing but capital . . . I have known a certain number of very rich men who were scamps and a larger number who were just dullards; but two of the finest men I have ever known, with the largest minds and highest ideals, were also men of great financial power. One of them is Jeremiah Milbank.”